Like a lot of Gen Z/Millenial cuspers, I've recently been indulging in Olivia Rodrigo's debut album, Sour. The breakout Disney star (from an era where they let Disney stars curse now) blew up on TikTok in January with the cathartic-scream of a song that is "Driver's License." Admittedly, her music took a little while to grow on me, but now it's really grown on me. I've also watched High School Musical: The Musical: The Series, the show that catapulted her to fame, which is kind of a perfect show, tbh, even if it is written for middle schoolers.

People of all ages have been finding a particular kind of relief in Rodrigo's music recently, whether it's healing from a former toxic relationship or just feeling like a teenager again. The more rock-heavy songs on the album, like "Good 4 U" and "Brutal," have drawn comparisons to Paramore and Avril Lavigne. The album is absolutely dripping with the particular brand of pain that only a teenage girl can feel, particularly when Rodrigo yells the lyric "YOU WILL NEVER HAVE TO HURT THE WAY YOU KNOW THAT I DO."

Another catalyst of this musical second puberty is Willow Smith's new single, "transparentsoul." It's the artist's first track in the pop-punk genre, and it's a certified banger. Willow takes inspiration from Avril Lavigne, Paramore, and Fall Out Boy on the song, as well as her mother's nu-metal band Wicked Wisdom. I sincerely hope Willow keeps experimenting in the rock genre because "transparentsoul" is definitely my favorite song at the moment.

I would gladly write my entire newsletter about these two musical queens, except for the fact that there isn't exactly a disability lens. But then I remembered that I had a whole newsletter draft on young-adult-focused disability content just sitting in my drafts from December 2019.

This issue revolves around illness media for teens and young adults, a topic that is essential to this newsletter and to my existence and my general vibe. I personally experienced my teenage years almost entirely through the lens of chronic illness, thanks to a combination of being diagnosed at 14 and then experiencing a ridiculous amount of anxiety for like, six years thereafter.

As a teenager, I read and watched just about anything with a chronically ill character in it. Like, for example, I once watched an episode of Home Improvement (the fictional comedy show with Tim Allen) because it had a thyroid cancer plot. Hence this newsletter, which I'm still trying to decide is either a genius emotional outlet or deeply unhealthy coping mechanism.

Like I said, this issue was originally written in December 2019, so these are mostly 2019 releases. Also, no pandemic. lol.

Simone is a Black high schooler in the Bay Area who loves musical theatre, is starting to notice cute boys (and maybe also cute girls?), and is HIV-positive. She’s the lead of Camryn Garrett’s young adult novel, Full Disclosure. Simone was born HIV-positive, having contracted it from her biological mother, and was adopted as an infant by her two dads.

It took a long time for my interlibrary loan of this book to come in, so at first I read just the first chapter in a Barnes and Noble. I have to admit I was, at first, a little put off by one of the main plot points: Simone being the student director for her school’s production of Rent. Without the context of the rest of the book, it feels cliche or somehow unbelievable; however, throughout the story, it actually becomes an important touchstone through which Simone (and, by extension, the reader) is able to learn about and contextualize the AIDS crisis as it existed in New York City in the 1980s. Simone is a total theatre kid — she references Lin-Manuel Miranda and Hamilton, which is actually incredibly recent and makes sense for a YA novel, but makes me feel old for some reason. Camryn Garrett has since expressed uneasiness about the musical herself (oh, the punishingly long cycle of writing/publishing). Her relationship with Miles, the love interest, is fueled in part by his willingness to watch her favorite musicals and then text her about them. Aww.

Full Disclosure does a great job of displaying the absolute awkwardness of being a teenager, from overbearing parents accompanying you to doctor’s appointments, to a make-out scene involving a misplaced ice cream cone. It’s a book that’s confident in its sex positivity. One of the book’s first scenes cements it as a solidly late 2010s YA novel: two teenage girls accompanying their friend on a drive to Planned Parenthood to get birth control. Another scene shows the group of friends (somewhat perplexingly) using fake IDs to go into a sex shop and buy a vibrator, and Simone’s friends discuss their bisexual, lesbian, and asexual identities throughout the book.

For the most part, Simone is a normal teenager. Obviously, the stigmatization of her HIV status has led to her having to change schools once, and with the notes in her locker, she’s afraid it’s happening again. HIV doesn’t complicate her life physically — Simone just wants information about how to protect her future sexual partner(s). It’s presented as something extremely manageable, it’s presented factually (Garrett did her research), and Simone is a mature teenager who’s routinely taken her pill since childhood. She attends a support group at the hospital, but it’s just one of the several communities she’s a part of. Full Disclosure is more about coming-of-age and sexuality, surrounding a character who just happens to live with HIV.

Hannah Moskowitz is the author of twelve (!) young adult novels and has contributed to several anthologies. Sick Kids in Love is her first novel dealing specifically with themes of chronic illness. The tagline of this book, "They don't die in this one," seems to poke fun at certain books in the "sick lit" genre that usually kill off their disabled characters by the end of the book.

If you're wondering what "sick lit" is, it's a somewhat controversial subgenre of young adult books where the protagonist suffers a tragic illness basically curated to make the reader cry. The genre has improved since the '80s and '90s, when Lurlene McDaniel ruled library bookshelves with titles like Too Young To Die, A Time To Die, Please Don’t Die, Sixteen And Dying, She Died Too Young. Lots of dying.

Hannah Moskowitz actually ran a podcast back in 2017 called "Hey Lurlene!" with fellow author Kat Helgeson, where the two read Lurlene McDaniel books, rating and reviewing them from a modern, chronically ill perspective.

Sick Kids in Love is, specifically, a book for chronically ill readers. Like, healthy people can read it, but it is for the chronic illness community. And it's beautiful.

Sixteen-year-old Isabel meets also sixteen-year-old Sasha in the hospital infusion room. (Classic rom-com scenario.) Isabel has rheumatoid arthritis, an advice column in her high school's newspaper, and a rich inner life, including an imaginary friend she made up to cope with the loneliness of her illness. Sasha has Gaucher disease, a witty sense of humor, and a bunch of siblings. They're both Jewish and live in New York City.

I won't blame you if you read this book for the quirky, adorable romance alone, but what makes this book particularly fantastic for chronically ill readers is that the characters talk a lot about the weird limbo they're in. Not healthy, exactly, but not about to die tomorrow. In pain, but not so much pain that they're regularly hospitalized. Able to explain it to their healthy friends and family, but not in a way that they'll really understand. I genuinely think every chronically ill person should read this book.

Moskowitz's most recent book is The Love Song of Ivy K. Harlowe. You can buy Sick Kids in Love here, and follow Hannah Moskowitz on Twitter.

I'm so happy to have the newsletter up and running again. If you liked it, it would mean a lot if you told a friend about it.

Thanks so much for reading this free issue. Happy Pride Month! (Pride issue coming later this month 👀) 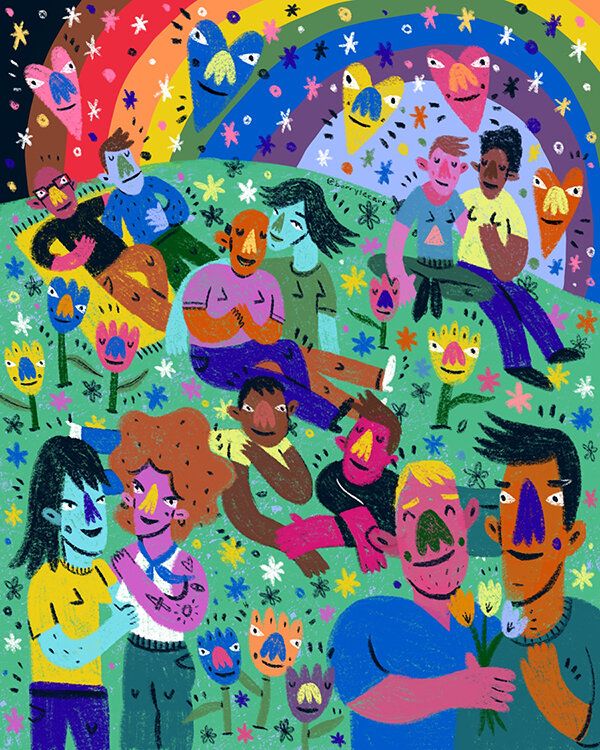